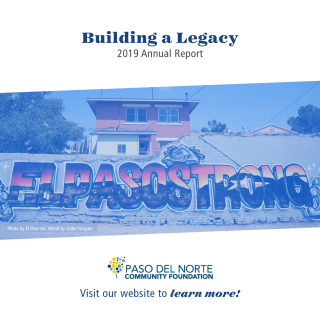 The  boards and staff of the Paso del Norte Community Foundation are pleased to share our 2019 Annual Report: Building a Legacy. The online annual report highlights the collaborative work to improve health, education, social services, economic development and quality of life in the region, grants awarded, and an accounting of foundation resources.

In 2019, the Paso del Norte Community Foundation received $16.4 million in donations as the result of 11,249 gifts from 9,458 donors for one or more of over 100 donor-advised, designated, scholarships and supporting organization funds, invested $13.4 million in grants, scholarships and charitable projects, and ended the year with $9.7 million in assets. The PDN Community Foundation was honored to support victims and families with generous gifts to the El Paso Victims Relief Fund as part of One Fund El Paso and promote philanthropy through El Paso Giving Day and El Paso Giving Time. The PDN Community Foundation has invested $21.2 million in grants and charitable projects since its inception in 2013.

The Paso del Norte Community Foundation, together with the Paso del Norte Health Foundation invested $25.1 million in grants and charitable projects in 2019 and $219.9 million since 1995. The two foundations partnered with the Fundacion Paso del Norte para la Salud y Bienestar, which raised an additional $600,000 to invest in initiatives and collaborations to promote health and well-being in Ciudad Juárez.

In 2019, the Fundación granted over $256,000 in matching funds to eight nonprofits that participated in the “Health Challenge Fund.” The Fundación also partnered with FICOSEC and the Municipal Institute for Women to jointly fund programs addressing gender violence in the poorest areas of Juárez; more than $300,000 were granted to six nonprofits, benefitting over 1,900 women affected by family and gender violence. Finally, our sister foundation continued promoting values through play and sport among over 70,000 children through their program “Escuelas de Bienestar” and realized the fourth edition of “Juárez en Acción,” a volunteering and charitable actions campaign that registered a record of 12,405 volunteers.

Learn about our impact, grantmaking, partners, funds, investments, financial statements and board and staff leadership in the 2019 Annual Report for our Community of Philanthropy at: 2019annualreport.pdnhf.org