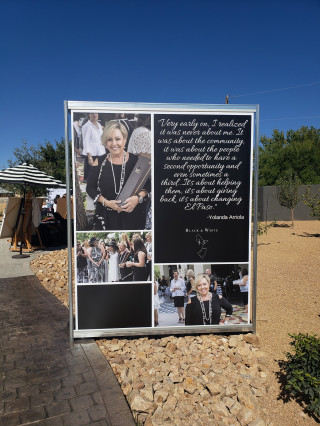 On a lovely October afternoon in the beautiful Upper Valley, the Arriola Foundation hosted dozens of ladies from the Paso del Norte region to a day of camaraderie, laughter, and care as they hosted their 5th Annual Yolanda Arriola Black & White Party.

In addition to celebrating and empowering women through the event, the Arriola Foundation raised close to $60,000 with one hundred percent of the proceeds going to support the children of the Make-A-Wish Foundation of North Texas.

“This year’s event not only raised funds to support children who are battling critical illnesses but also celebrated the hardworking women of our borderland and allowed them to connect to build stronger relationships,” said Kenia Arriola, Board Member of the Arriola Foundation, and co-organizer of the Yolanda Arriola Black & White Party.

Kenia says Yolanda Arriola, who sadly passed away suddenly last November, always strived to be a positive influence in our community. Although Mrs. Arriola was not a native El Pasoan, she adopted the Sun City as her home and became an active philanthropist who continually gave back to others.

Five years ago, Mrs. Arriola launched the Black & White Party to bring women together for an event where they would unite and celebrate one another all while giving back to a good cause. The event has become known for glamour, great music, food, and of course, the Black & White fashion show!

“The fashion show is definitely a moment where all women are able to feel beautiful while supporting one another and having fun,” said Kenia. “We feel this is an important event that we are committed to continuing not only to celebrate women and philanthropy, but also to honor Yolanda and continue her passion to make change in our community.”

With over ­­­150 women in attendance and ­­­$60,000 raised, the Arriola Foundation was incredibly touched to witness Yolanda’s legacy of giving live on through our community of philanthropy.

The Paso del Norte Community Foundation is proud to support the Arriola Foundation and their mission to make our community a better place through charitable giving, which was what Yolanda Arriola always prioritized and did.

To learn more and support the Arriola Foundation,  visit https://pdnfoundation.org/give-to-a-fund/yolanda-arriola-memorial-fund-for-children