Breaking Ground with Moms on Board 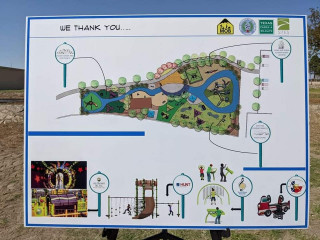 On September 8th, MOB brought the community together to celebrate the groundbreaking of the first All-Abilities Playground at Ascarate Park. The event took place under the late morning sun on the 35,000-square-foot site where the community will soon be able to play and enjoy.

“We are very excited to reach this milestone. We couldn't believe we were planning the groundbreaking. We have worked so hard for three years and it just makes us feel all our hard work has paid off”, says Adrianne Moody, Co-Founder of MOB.

The three-year project raised $1 million through the generous support of sponsors and donors. Moreover, MOB partnered with the County of El Paso to bring the playground to fruition.

“The County Judge, Commissioners Court, and Parks Department Director Veronica Myers have been nothing but amazing. It was truly a dream team: the County, Paso del Norte Community Foundation, and MOB,” says Adrianne.

The playground will be the first of its kind in the region and will include a variety of inclusive features such as a Dino Dig, sensory garden and tunnels, a maze, musical instruments, and more. It is designed to promote healthy development for everybody’s physical, social, cognitive, and sensory abilities, breaking the barriers of exclusion by providing a great and safe experience for all.

Building on the partnership with MOB, the County was able to secure additional funding to expand and provide families with new all-abilities playgrounds at Gallegos Park in Canutillo and Risinger Park in Fabens.

If you would like to support MOB, you can take part in their brick campaign, Pave the Way to Play. The campaign encourages the community to come together to create a beautiful and collective brick path at Ascarate Park. The path will be an added feature to the park, showcasing 4x8 foot commemorative engraved bricks, with colorful detail, heartfelt messages, or dedicated names.

Prices vary from $250 to $525 depending on art design and amount of text. Individuals and families can order bricks by contacting the MOB: Adrianne Moody, Sandi Brackeen, or Leyla Zeidan Safa at momsonboardunite@gmail.com