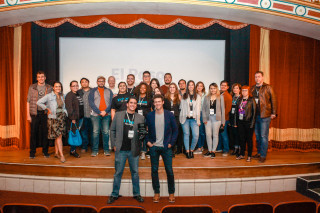 Log off Zoom, grab your favorite soda and popcorn, and get ready to enjoy the El Paso Film Festival… in-person!

This year’s El Paso Film Festival will be taking place October 14-17 in El Paso’s Downtown Arts District inside the beautiful Philanthropy Theater. Film lovers will be able to enjoy over 50 films that include short and feature films from local, regional, national, and international filmmakers.

The El Paso Film Festival is eager to be back in person this year to support personal connections. “While we offered our 2020 programming for free last year on our digital streaming channels, it didn’t feel the same as being in person,” said Carlos Corral, Artistic Director of the El Paso Film Festival, “There is a human connection that I know people are looking forward to and expecting with this year’s festival.”

“El Paso was one of the largest metropolitan areas in the state of Texas without a named film festival. I was able to gather the resources and support to put the festival together, with fiscal support provided by the Paso del Norte Community Foundation,” said Corral.  “Thanks to the support of our community, we’ve grown into the festival we are today. Every year is an opportunity to create engagement and awareness among professional filmmakers, artists, and audiences across a national platform.”

This year, the El Paso Film Festival will award up to $6,000 to independent filmmakers for their featured work. Corral said the El Paso Film Festival is committed to elevating the creative voice and vision of filmmakers as they make their path towards the film and television industry by connecting them to seasoned professionals for mentorship and collaborative opportunities.

To attend this year’s film festival, people can purchase their tickets online up to one day before the events are scheduled to begin. https://elpasofilmfestival.org/tickets-and-badges