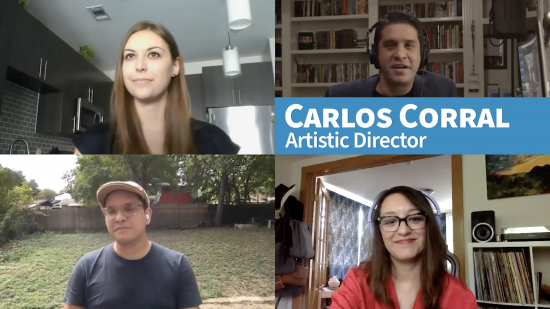 El Pasoan Carlos Corral started the El Paso Film Festival in 2018 because “a city of our size should have a film festival – a place for local filmmakers and filmmakers from all over to showcase their independent films.”

Since then, the El Paso Film Festival has screened short and feature-length movies from a variety of filmmakers and regions, including homegrown talent, and welcomed well-known guests like director Robert Rodriguez.

“Being a part of the Paso del Norte Community Foundation is the foundation of this festival,” Corral said. “They are our fiscal partner and without them, we wouldn’t be where we are today. Thanks to their help, we’ve been able to navigate and focus on the community we want to serve.”

In an effort to present the festival in a safe environment due to the COVID-19 pandemic, the festival went virtual in 2020. Audiences were treated to a selection of films by local, regional and national filmmakers from October 16-25 all in the comfort of their own homes via Apple TV, Roku and Fire TV.

“Our first priority is to keep El Pasosans safe,” says Corral, “The El Paso Film Festival took the approach of not having an in-person format festival for 2020 so as to not risk a single filmmaker or attendee with exposure to the virus.”

Despite not being able to hold an in-person event, the El Paso Film Festival awarded $6,000 in cash prizes to participating filmmakers and hosted a number of virtual film industry guests.

Local filmmaker Anthony Salgado presented his second feature film, “Cut the Tech” during the 2020 El Paso Film Festival, he says, because the festival has helped shed light on talent coming from El Paso, as well as serving as a resource for filmmakers to network with other people in the film industry.

“ ‘Cut The Tech’ is about a young woman who breaks her phone and has to endure a day without it,” Salgado said. “I’m trying to make a point that, yes, we have technology but it’s also a curse too. We created this technology but we put a barrier on how we live. Our attachment to technology is affecting us, especially now, during this pandemic.” “Cut The Tech” was filmed and produced in El Paso with a local crew and local actors.

“Without an opportunity for the film community to grow and have a place to share ideas, people are going to leave and make their film somewhere else,” Salgado said. “We want a strong film community here. Local films bring a lot of original content and people need to be able to see them. Festivals are important, they grow that artistic blueprint in our community.”

The El Paso Film Festival not only helps nurture homegrown talent, it also attracts others to visit and return.