July 19, 2019
El Paso Pro-Music brings the beauty of chamber and classical music to the region 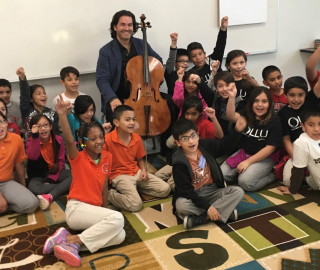 El Paso Pro-Musica embraces the heart and beauty of chamber and classical music and is dedicated to sharing that passion with the southwest region.

With the help of Pro-Musica’s Artistic Director and Grammy Award-winning cellist, Zuill Bailey, the organization continues to bring the most talented musicians from all over the world to El Paso for concerts and outreach. The Pro-Musica Foundation, a fund of the Paso del Norte Community Foundation, was established to support Pro-Musica’s work and ensure that El Pasoans have the opportunity to enjoy a culturally rich and diverse music scene.

Felipa Solis, Pro-Musica’s Executive Director, says that its partnership with the Paso del Norte Community Foundation is helping the organization achieve its mission to provide the El Paso community with music appreciation programming; music education for all ages; performances to audiences who may not have the opportunity to experience chamber and classical music; and otherwise promote educational and cultural development.

“Our fund is designed to grow and work with Pro-Musica,” said Solis. “The Community Foundation is our key to stability. The fund helps us so we can raise supplemental funds and gives Pro-Musica a sense of stability.”

Next spring, Pro-Musica will present a performance by world-renowned violinist, Itzhak Perlman, in celebration of his 75th birthday. Pro-Musica Executive Director, Felipa Solis, expressed how honored El Paso Pro-Musica is to have Itzhak Perlman perform for a second time in the Sun City, “It is super special that we have an artist like Itzhak. His presence on stage is so jovial and exudes an energy that is contagious.”

Itzhak Perlman in Concert will take place Tuesday, March 3, 2020, at the Plaza Theater at 7:30 p.m. Perlman will be accompanied by pianist Rohan De Silva who has also performed with Perlman at the White House.  Tickets are expected to sell out quickly. Ticket prices range from $50 to $150 and can be purchased online at ticketmaster.com, any Ticketmaster outlet or the Plaza Theatre Box Office.

Perlman is a 15-time Grammy Award winner and has been recognized with the Grammy Lifetime Achievement Award for excellence in the recording arts. At a young age he contracted polio, but that never stopped the violin virtuoso from achieving greatness.

The road to fame began when he was only 13-years-old and performed on the Ed Sullivan Show. Shortly after, Perlman performed at Carnegie Hall and he slowly began to gain public recognition. He then was honored with the Leventritt Prize for classical pianists and violinists and it is then that his talent began to impact the world. He has performed internationally, conducted numerous orchestras, shared his skills through educating youth at the Perlman Music Program in New York, and still performs worldwide. He has also been a repeat guest on The Tonight Show and others throughout the years, spreading his love of classical music to wider audiences.

Many will remember Pearlman from his appearances on popular children’s shows, such as Sesame Street and Mister Rogers’ Neighborhood.

“This is incredibly impactful for El Paso because Perlman prides himself on music being accessible to all,” says Solis.

Solis explains that the qualities Pearlman possesses are an influence on Pro-Musica’s mission to provide music education and appreciation to the community.

“This is a once in a lifetime opportunity and Pro-Musica is driven to bring artists like him to share that experience,” said Solis. “With the help of the Paso del Norte Community Foundation, Pro-Musica’s endowment ensures that educational and cultural programming, featuring classically-trained musicians from around the world will continually be provided in our community.”

Perlman was born in Israel and migrated, along with his family, to the United States at a young age. Since being diagnosed with polio, his attempt to pursue his passion was doubted on numerous occasions, but his persistence has inspired generations of music lovers.

“He’s a fighter at achieving his dreams, no matter how hard the fight is,” Solis said. “People see that, our community will see that.”

“Itzhak Perlman’s concert is not only for chamber music lovers, it is for anyone who enjoys all music or wants to see an example of relentless perseverance,” says Solis.

For more information and to donate to El Paso Pro-Musica, click here.