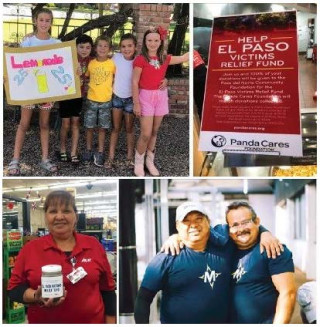 To all of the generous donors to the El Paso Victims Relief Fund in the Paso del Norte Community Foundation, and to our community-at-large, I wanted to share an update on the extraordinary generosity and goodwill six months since the tragic shooting of August 3rd.

We have had the incredible fortune of talking with and meeting so many donors. From a Navy veteran who together with his former shipmates on the USS El Paso took up a collection for the victims’ fund to the grandmother who delivered a Folgers tin filled with coins, we recognize that every gift comes with heartfelt meaning and a personal story. Donations came from so many sources including corporate donations, Foundation contributions, telethon donations, concert proceeds, t-shirt sales, bartender tips, Facebook fundraisers, proceeds from sales, and in-person and on-line donations.

$315,000 of total contributions were utilized to provide immediate assistance to victims between August and November.  The remaining $11,518,588 were contributed to the National Compassion Fund to distribute to victims and families according to the protocol shared with the public and adopted by the One Fund El Paso Task Force and Board.

According to the protocol, victims could apply for benefits in one of four categories — death, long-term injury, short-term injury and psychological trauma.  363 applications were approved for gifts from 441 applications. Approved applications were received from residents of the United States and Mexico. Applications had to meet the requirements outlined in the protocol to receive approval.  Denials occurred for several reasons including incomplete applications after several contact attempts, not being present, or not having received specified medical services.

As of today, ~$11.47 million has been fully distributed. For the balance, there is a team of volunteer attorneys and estate professionals helping families establish the required trusts or custodial accounts to complete the distribution of the remaining gifts as soon as possible. The identities of the recipients and the amounts allocated in each category have not been revealed in order to protect the privacy and security of victims and families. An audit will be conducted once all funds are distributed.

GIFTS HAVE MADE A DIFFERENCE

As the families we have talked to continue to grieve and heal, they have expressed their gratitude for the extraordinary generosity. One family recently wrote, “That day we lost a pillar of our family, a loving mother and wife whose absence we continue to feel every day. In the midst of this hardship, however, we have also met your support and enormous generosity and we are very thankful for it. We have received from you more than we could ever have expected, and we want to let you know that your help will make a big difference in these coming years. You have given us an incredibly valuable resource that will be crucial in relieving some of the financial pressures of everyday life and allow each of us to open a space for ourselves to heal and begin the process of retaking our lives after these very difficult past five months.”

As the philanthropic resources are gifted to victims and families as a show of solidarity and support, we know that the healing work of our community is not over.

The United Way of El Paso County and County of El Paso have opened the El Paso United Family Resiliency Center to offer ongoing programs, services and support to those impacted by the shooting.

We continue to receive contributions for three additional funds established for victims and families: CEA Fund for August 3 Survivors for immediate educational needs, CEA Survivors en Acción Scholarship Fund for the higher education of children of victims killed, and United Way’s El Paso Community Assistance Fund for community healing. You can learn more or support these funds at: www.pdnfoundation.org.

We have received further support from Walmart and other generous sponsors for special efforts like the 2019 El Paso Giving Day and El Paso Giving Time campaigns to provide financial resources to nonprofit organizations so vital to our community. This has been an additional show of support for our community.

We are especially grateful to the first responders, community and volunteer leadership, and donors for gifts of financial resources, messages of hope and love, and extraordinary acts of kindness.

Visit pdnfoundation.org or click on this link to make a donation.