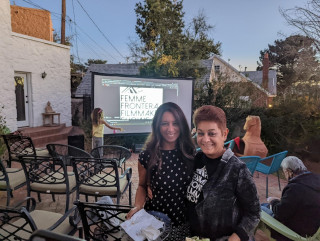 The Femme Frontera Filmmaker Showcase (FFFS) began in 2016 as an informal celebration of films made by women filmmakers from the U.S. and Mexico border region. In 2018, the Showcase was listed as one of the top film festivals for female filmmakers.  Now in its sixth year, it has expanded to include international filmmakers and events beyond its film screenings. This year’s showcase shared beautiful, haunting, and hopeful tales from the U.S.- Mexico border, Mexico, Tawain, India, and the United Sates. Among the stories shown was the Juárense documentary; a film about a woman’s pregnancy journey during COVID; and a documentary short about a family’s UFO siting.

Khaula Malik, Director of the 2021 FFFS Documentary Short, “There Was Nobody Here We Knew!”, said she was excited to be apart of this year’s showcase.

“I had heard of the Femme Frontera Festival and wanted to apply because the festival’s focus on giving a platform and voice for filmmakers who are from the nondominant communities, like communities of color and border communities. This is a festival and audience who I knew would be able to connect with my film.”

If you were unable to attend this year’s FFFS, you can visit www.femmefronteracommunity.org to see a list of the films shown.

To learn more about Femme Frontera and how you can support their mission visit Paso del Norte Community Foundation: Transform the El Paso region with Charitable (pdnfoundation.org)