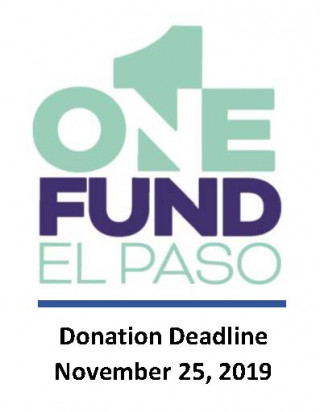 The last day to donate to the victims of the August 3 mass shooting in El Paso is Monday, November 25.

Donations may be made at onefundelpaso.org.

More than $10 million has been raised for the victims. Donations have come in from El Pasoans and people around the world since the shooting, which left 22 dead, more than 40 who have sought medical treatment for injuries, and hundreds suffering psychological trauma.

A total of 441 applications has been received from victims of the massacre, according to the National Compassion Fund, a program of the nonprofit National Center for Victims of Crime, which is handling the process. A month-long application period ended on November 8.

Applications were available in four categories — death benefits; individual physical injury for victims requiring overnight hospitalization or long-term care; individual physical injury of victims treated at area hospitals on an emergency outpatient basis; and individuals witnessing the attack and its aftermath who have sought access to mental health support services. Victims must have been present at the Cielo Vista Walmart, Sam’s Club or their respective parking lots during the attack.

National Compassion Fund staff is working with local law enforcement, the District Attorney’s office, and Walmart to validate applications. The process should be completed by early December.

The One Fund El Paso Task Force, which is coordinated by Stephanie Karr and chaired by Ruben Vogt, and its board of directors will make the final determination on how the money will be allocated.

The non-taxable gifts will be distributed to validated applicants by mid-December.