Wrights give back to the community they love 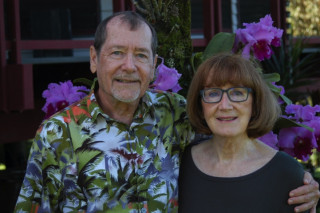 When Carl and Sandra Wright moved to Kauai, Hawaii, to work and subsequently retire on the island, they decided they wanted to give back to the community they still loved. The Wrights had the idea of creating an annual $5,000 scholarship for young women pursuing a career in STEM fields.

But being 3,000 miles from the Sun City they needed a little help, so the Wrights reached out to the Paso del Norte Community Foundation for assistance.

Carl Wright was born and raised in El Paso, where he graduated from Irvin High School and received his Bachelor’s and Master’s degrees in electrical engineering at the University of Texas at El Paso. Sandra Wright was born in Albuquerque, New Mexico, and attended Mills College where she earned a full scholarship. She went on to work in marketing and media.

Throughout their careers, the Wrights lived in several cities, so while pursuing the opportunity to start the Carl L. and Sandra E. Wright Scholarship for Women in Science, Technology, Engineering and Math Fund, they researched a number of different foundations in a variety of communities.

But, the Wrights said, the Paso del Norte Community Foundation and its Community of Philanthropy stood out above the rest.

“When we reached out to them, Mica Short was incredibly helpful,” said Sandra Wright. “They made the process so easy for us and they were so well organized.”

Short, who is the Foundation’s Vice President of Development, helped the Wrights to form an application committee to administer the scholarship.

The scholarship is available for young women who are high school graduates entering college as well as continuing undergraduate students. The scholarship committee gives priority to Native Americans, Hispanics, Pacific Islanders, and African American women who are pursuing education in STEM fields. The application will also prioritize students studying genetic modification or any other areas of bioscience.

During his time at UTEP, Carl recognized the lower enrollment numbers for women in engineering programs. Sandra also recognized how important receiving a scholarship had been to her education and career as a young woman.

“I remember being in the electrical engineering program and only having one female classmate in a program of 150 students,” he said.

After Wright received his Master’s degree in electrical engineering, he worked on computer software at Sandia National Laboratories in New Mexico, where his work included laser and solar research. Over the years, working in electrical and computer software engineering, Carl Wright said, he saw an increase of women in the field but still, felt there was room for more diversity.

“I have a few female colleagues that I worked with over the years, but I still see the need for women in these fields,” he said.

Recent Commerce Department statistics indicate that women comprise less than 25% of the STEM workforce. Of those women only 5.7% are Black, 6.4% are Hispanic and 0.2% are Native American and Pacific Islanders. The Wrights want to help change the gender and racial disparity in STEM fields with their scholarship.

“Receiving a college degree is important to us and whether you are young or old, STEM is important for everyone’s education,” said Sandra Wright who strongly believes how beneficial it is to invest in the sciences. “Carl has worked with many wonderful women engineers and we just want to help other young women contribute to these programs like our colleagues and friends.”

For more information on applying for the Carl L. and Sandra E. Wright Scholarship for Women in Science, Technology, Engineering and Math, visit https://pdnfoundation.org/give-to-a-fund/wright-scholarship-for-women-in-stem.