The installation will be designed to encourage connection, communication, and community – a comfortable, accessible, and inspiring gathering place for the residents of El Paso-Cd. Juarez - free and available for all. It will complement and connect the public with the Museum’s extensive collection and dynamic exhibitions. It will also serve as a place for reflection dedicated to the thousands of individuals across our region who lost their lives to COVID-19.

The site-specific installation will consist of a suspended LED array, zero gravity benches carved out of local stone, and planters with species indigenous to the Chihuahuan Desert. The 120-foot LED array will be composed of 13,500 individually-addressable, monochrome, and energy-efficient LEDs activated by the artist in non-repeating patterns. This unique interactive display will never repeat the same light patterns, creating a different experience for every visitor.

In accordance with an agreement with the City of El Paso approved in November 2021, the EPMA Foundation pledges to raise the $6 million funds required to design, construct, install, and permanently maintain the signature project by Leo Villareal. The EPMA Foundation is partnering with the PDN Community Foundation to support fundraising and maintenance of the project. 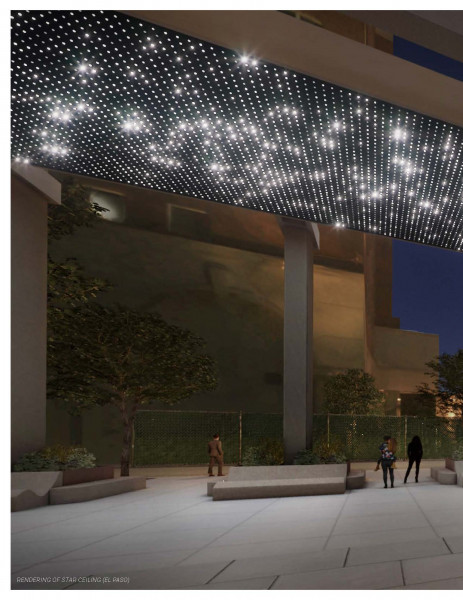 Leo Villareal grew up in El Paso and Cd. Juarez, and has fond memories from his youth observing the night sky over the desert, the vast expanse of city lights, the illuminated star on the Franklin Mountains, and the ceiling of the Plaza Theater with its twinkling constellations. These early formative impressions influenced Villareal and the light sculptures he has been creating for the last 20 years that fuse software and LED technology into arrays that evoke pyrotechnic splendor.

Villareal’s works now span the globe including, most recently, lighting the 15 bridges that span the River Thames in London and The Bay Lights, a monumental 1.8-mile installation of lights on San Francisco’s Bay Bridge. He has dozens of site-specific works including the Light Matrix for the Auckland Theater Company in New Zealand, Volume (Frisco) at the Dallas Cowboys Headquarters, Volume (Renwick) at the Smithsonian in Washington, D.C., and Stars at the Brooklyn Academy of Music in New York. His work is also in the permanent collections of numerous museums including The Museum of Modern Art in New York, the Naoshima Contemporary Art Museum in Japan, and The National Gallery of Art in Washington, D.C.

About the EPMA Foundation

The EPMA Foundation was established in 1998 to support the El Paso Museum of Art and its exhibitions, programming, and outreach by raising funds and building its permanent endowment. While the Museum is municipally owned and operated, more than 15% of the Museum’s revenue comes from the EPMA Foundation and its initiatives.

Our Community of Philanthropy Continues to Grow