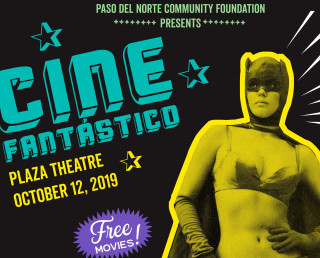 Movies are in Spanish with English Subtitles.

Cine Fantástico was established in 2018 to celebrate popular Mexican films and the legacy of the Calderon Bros., whose movie theater, film distribution and movie production empire began in El Paso and Cuidad Juárez. Donate to the Peranencia Voluntaria Film Fund and help preserve more treasures from the Mexican cinema. To donate, click on this link.

El Paso Film Festival, now in its second year, is the newest film festival in the region and is among the largest showcase of independently produced documentary and narrative short and feature films. Come see the best Indie filmmakers are producing in what is becoming the fastest growing Independent film festival in Texas. The festival kicks off October 24 - 27, 2019 in beautiful downtown El Paso, Texas.

Special Guest: Robert Rodriguez, will present his new film"RED 11" along with a filmmaking Master Class on October 24, 2019 at 7 p.m. at the Plaza Theatre.

For more information, schedule of events and tickets, click on this link.